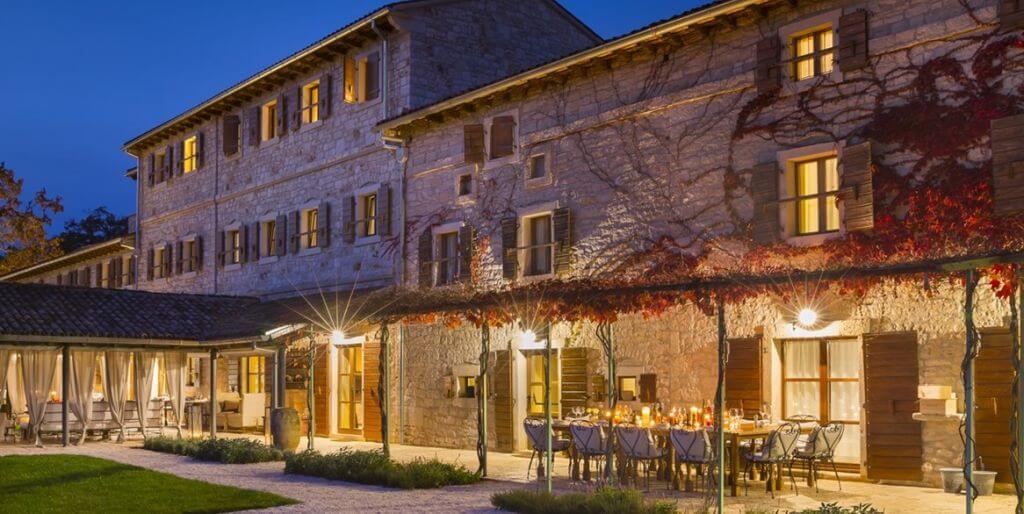 DMC Croatia – 5 great places with the best hotels in Croatia

Full of everything, is pretty much how the Croatia tourist board describes its country; and while it may seem a little self-serving, it’s not too far from the truth. Sprawling like a crescent across the north-western part of the Balkan Peninsula, it borders Hungary and Slovenia to the north, Serbia to the east and seems to wrap itself around Bosnia. Its geographic diversity means that in the north and northeast you’ll encounter the sweeping Pannonian Plains, to the west and south of these stretches the central mountain belt and karst plateaus of the Dinaric Alps, and finally the magnificently long Croatian coast to the west sprawls 1,777kms southwards. With so much to see, your DMC Croatia can’t show you everything, but we can show you the best of everything, starting with the best hotels.

With a length of 1,777km and a whopping 1,246 islands, it’s clear why the Croatia coast has become one of the most popular travel destinations for our DMC Croatia. Given its incredible length and popularity among tourists and business people, it goes without saying that hotels are in abundance here. The beautiful Istria Peninsula separates the Gulf of Trieste with mainland Croatia. The three islands of Krk, Cres and Losinj occupy the Kvarner Gulf in between.

On the peninsula itself there are several great hotels that our DMC Croatia chooses from. The Kempinski Hotel Adriatic is located in Savudrija, at the very top of the Istria Peninsula. This 5-star hotel commands a perfect location amid olive groves and vineyards, but also right next to the sea with its own private beach.

Wine connoisseurs will absolutely love the stone built, 20th century Meneghetti Wine Hotel & Winery. While the estate dates back to the 19th century when it was a refuge for Austro-Hungarian army officers, it eventually became lost in time and overgrown by the thick Mediterranean underbrush. It was rediscovered by a couple who lovingly restored it to its former glory and turned it into a vineyard and top class hotel with 38 luxurious accommodation units. Each room has an open view of the vineyards or olive groves. This is a popular place, so by using our DMC Croatia you’ll have more chance of a unique experience.

The San Rocco Heritage hotel & Gourmet Restaurant is conveniently located near the motorway in the northern part of Istria for those on a busy schedule. Although close to the motorway, you wouldn’t know it as its situation in a large park and olive grove affords the same peace and tranquillity you’d find in the deep countryside.

How about staying in a luxury cruise liner perched on a hill overlooking the Adriatic in one of Croatia’s most popular seaside towns, Rovinj? Well, your DMC Croatia can book you into Hotel Lone, which has been designed to resemble just that, and is only a 10-minute walk from the centre. With 236 rooms and 12 suites, all with a sea or park view, this is truly a unique experience.

Also in Rovinj, the New Grand Park Hotel is located closer to the seafront. This 209-room hotel boasts a grand view of the old town and the Croatia Islands all from their grandiosely designed seafront rooms. You can enjoy walks along the exclusive promenade or immerse yourself in their wellness and spa facilities.

All of us here at DMC Croatia love the opulent resort of Opatija on the eastern side of the Istria Peninsula, where there are two more of the design hotel chain’s unique architectural achievements: The Bevanda offers 10 elegantly furnished rooms all named after famous former residents of Opatija throughout history. Hotel Navis will wow you with its large glass walled rooms offering spectacular sea views from its slightly elevated position atop a rocky ledge on the sea shore. Tesla drivers can also charge their vehicles here.

Of all three islands in the Kvarner Gulf Losinj and its partner island Cres have to be the most beautiful. The two are in such close proximity that only a short land bridge is needed to link them, meaning your DMC Croatia can easily whizz you around all the best places and arrange any number of activities or events suited to your business activities. We also know the best hotels.

Situated in Cikat Bay, just outside the port city of Mali Losinj, the Boutique Hotel Alhambra is in a quiet location but just a 15-minute walk from the town centre. It comprises two villas rolled into one, and like every first class hotel has a sea view. Ask our DMC Croatia for a sea view room. The neighbouring Hotel Bellevue offers beautiful rooms and public areas full of open space filled with light flooding in from the huge windows running right up to the hotel’s high ceilings. The Bellevue offers excellent spa and wellness facilities which are also available to guests of the Alhambra.

Further south in Dalmatia, the beautiful historic town of Sibenik is the perfect spot for sailing trips out to the fabulous Kornati Islands. Our DMC Croatia often suggests the Heritage Hotel Life Palace, which offers 17 rooms located in a 15th century palace in the town square.

The island of Hvar is dubbed the Queen of Dalmatia, and we at DMC Croatia couldn’t agree more. Due to its strategic position it has been important since ancient times. While it may be one of the more popular islands in Dalmatia, you can find the perfect retreat at the Adriana Spa hotel. Known especially for its luxury spa services, which spread across 6 indoor and outdoor levels, the 1600 sq-metre Sensori Spa is a sight to be experienced.

Finally, the magnificent island of Korcula is one of the 6th largest islands in Croatia. It’s the second most populated, next to Krk. The old town of Korcula is often dubbed “Little Dubrovnik” because of its striking medieval similarity. Our DMC Croatia often uses Lesic Dimitri Palace, set in an 18th century bishop’s manor in the old town. This boutique hotel offers 5 residences ranging in size from one to three bedrooms, all apparently inspired by Korcula’s most famous resident, Marco Polo. Legend has it that his travels along the Silk Road began from this beautiful island.

For centuries people have been visiting and looking for accommodation in Croatia. The country has a rich history, dating back to Roman times, and this richness is clearly evident in the plentiful ancient buildings and villas scattered throughout the landscape. Numerous buildings can also be found in its equally beautiful cities, and as you have seen many are now modern hotels. But the ancient people had to build their own, or search for days or weeks. They didn’t have DMC Croatia at their disposal. So to be ensured of the best quality hotels for your incentive trip, contact our DMC. Croatia is packed with many great choices.

When it comes to luxury hotels, Dubrovnik has no shortage of...