While there are numerous destinations available worldwide for a great incentive, Croatia has to be one of the most popular. Being one of the larger of the former Yugoslavia countries, Croatia is a geographically diverse destination offering a vast array of possibilities from vibrant, lively cities with ornate architecture built over centuries by the various cultures that have inhabited them, to a karst mountainous terrain rolling off to a protracted coastline shimmering in the heat of the Mediterranean sun. As a tourist Mecca, there is no shortage of great hotels in great locations. We can help you decide where best to base yourselves for the duration of your incentive Croatia. Here are just 5 great ideas.

Located in the northwest of the country, the nation’s capital, Zagreb, is the perfect starting point for your incentive. Croatia has a capital city that is not only an alluring place, but also a city walker’s paradise with its thousand-year old cobbled upper town lined with gas lamps, museums and galleries. The spires of the magnificent Saint Mark’s Church protruding above the sea of red-tiled rooftops is a sight for sore necks. Museum lovers will be in their element, as Zagreb can boast the largest concentration of museums per square foot than any other city in the world. The 19th century lower town is the place to be for shopping, restaurants and theatres, or for relaxing in the city park.

Zagreb isn’t a particularly large city, so the majority of the best hotels are located close to the centre, train and bus station; making it a convenient base for the start of your incentive Croatia.

Dating back to 1925, the luxury 5-star Regent Esplanade Hotel was once a stopping point for passengers on the Orient Express. It is also, coincidentally, located close to the train station. The hotel has been host to presidents, politicians, movies stars and famous musicians over the years. In 2004 it was completely renovated and accommodates guests in beautifully crafted rooms that combine art deco with contemporary designs. Seems that when it comes to a business incentive, Croatia has been a star attraction for decades.

Built between 1921 and 1923 and originally the Austrian bank Weiner Bank-Verein, the Amadria Park Hotel Capital building was designed by two of Vienna’s most famous architects. Its ornate art-deco exterior has been perfectly preserved.

The beautiful ancient city of Zadar is one of the gems of the Dalmatian coast. It is the oldest continually inhabited city in Croatia. On a small peninsula jutting out from the mainland is the old town, splattered with Roman and Venetian ruins. So imagine how great it would be to stay and base your incentive Croatia right in the heart of it. Well you can.

Hotel Bastion offers 28 rooms and possesses a prime location right in the core of the old town. It is built upon the remains of a medieval fortress at the tip of the old town and peninsula. But when it comes to an incentive, Croatia is fully up to date. Equipped with all the latest technology, this hotel’s multifunctional conference room blends high tech with ancient surroundings.

A little further north from Zadar on the Punta Skala peninsula, the Falkensteiner Hotel & Spa Iadera offers 210 rooms and suites. For business, incentives and more it offers 6 conference rooms, a panoramic sauna with an ocean view, exclusive private spas, Turkish bath and a secluded wellness garden.

Split is known by all, and is the largest city in Dalmatia and the second largest in Croatia. Its most alluring sight is the opulent Diocletian’s Palace, built for the Roman Emperor Diocletian in the 4th century. Sounds like a great place for your incentive Croatia, doesn’t it? Well, once again you can. The Hotel Vestibul Palace is situated right inside this palace between the emperor’s chambers and square and was created by the blending of the Roman, Gothic and Renaissance periods.

While it may seem hard to beat staying in a palace, the nearby 5-star Hotel Park comes very close, offering a variety of luxury rooms including business rooms with a city view.

The island of Solta is a perfect stop off on your incentive. Croatia may have a huge coastline, but many of its islands are very well connected. This one is so close to Split and so well connected that it has practically become an island suburb. Located in a historic castle in Maslinica, the Martinis Marchi Heritage Hotel faces west and offers 7 suites with unrivalled views across the Adriatic.

Dubrovnik needs no introduction. But if you do want to know more about this UNESCO Heritage Site, see here. It’s no surprise that Dubrovnik, being possibly the foremost destination for MICE, is a favourite destination for clients looking for a great incentive Croatia. And we know the best the city can offer. It also comes as no surprise that there are great hotels in abundance. Here are a few of our favourites:

Villa Dubrovnik commands a spectacular view over the Adriatic and Island of Lokrum and is also 2kms from the 13th century Knezev Dvor (Rector’s palace). It offers 55 rooms set up on a cliffside right at the shore of the Adriatic.

Hotel Kazbek is situated directly on shore in the bay of Gruz just 3 kms from Dubrovnik Old Town. Offering 12 rooms and 1 suite, it’s small, cosy and also available for exclusive use on your incentive Croatia.

If you want to stay in style in the heart of the old town then your best option is the luxury 5 star boutique Pucic Palace.

The nearby Hotel Excelsior offers the best view of the old town, with just a 5-minute walk to the ancient city walls. The hotel has welcomed many famous guests over the years, including Queen Elizabeth II.

The Hotel Bellevue is a little closer to the old town, but still far enough outside to provide a respite from the hustle and bustle. It offers 91 rooms overlooking the beautiful Miramare Bay and three large areas for meetings and events.

An incentive to stay

So there you have it, five great hotels and locations for a great incentive Croatia has to offer. Contact Liberty Adriatic now and we can help you plan your perfect incentive. Croatia is waiting! 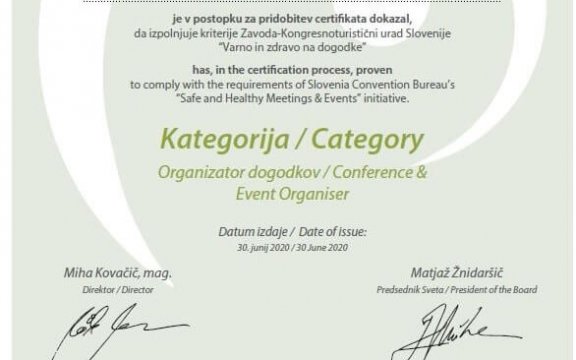 Ready to greet you again

Liberty Adriatic is ready to meet and greet you under the be...

Slovenia is an amazing location to visit. Slovenia has so mu...